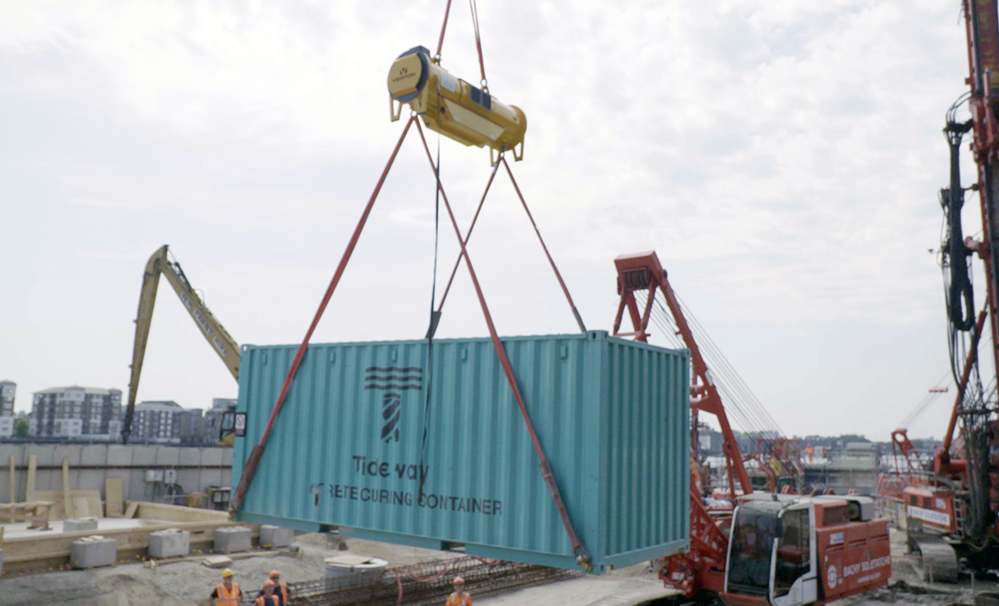 An award-winning remote-controlled load management system developed for all crane operations which significantly improves safety by eliminating the need for human held taglines to control suspended loads has been launched in the UK.

Lift and orientation specialist Verton Australia has developed the R-Series, a system which can be applied to suspended loads of all sizes and across industries including infrastructure, engineering, construction, general cargo shipping, resource development, defence, wind and mining. The system, invented by Verton’s founder and Chief Technology Officer, Stan Thomson, was recently honoured by the Good Design Awards, Australia’s peak industry design awards, in the engineering design category.

The R-Series, which boost productivity and safety, has been demonstrated at Sir Robert McAlpine Ltd. Plant Department and Kettering Workshops and the £4.2billion Thames Tideway Tunnel project in Wapping.

Verton Managing Director Trevor Bourne said: “We’re delighted to be launching this new technology in the UK which will significantly improve safety and boost productivity and efficiency.

“The R-series is a world-first, remote-controlled load management system which Stan Thomson invented and it is revolutionising the world of lifting operations. With the R-Series, workers will thankfully no longer be near or under moving loads reducing accidents and fatality rates in crane operations.

“Verton’s equipment has already been adopted by crane companies and mine operators in Australia and we have had strong interest in Europe and are talking to companies globally. Our lifting solutions will be used around the world and we are looking forward to working with UK partners in the coming months.”

The R-Series is available in various models and can handle loads of up to 20 tonnes. Verton has also developed solutions up to 400 tonnes. The equipment is operated through an industrial remote control with cameras to live stream the operation. All models connect to smart software which interprets real time load movement. Live metrics help with decision making on site with stored data informing future efficiencies and benchmarking.

Dominic Lovelock from the Thames Tideway Tunnel project said: “The Verton equipment showed me the potential for new ways of safer lifting on our construction sites. I joined my team in reviewing the lifting beam technology in operation at the King Edward Memorial Park Foreshore Tideway site (KEMPF) and we could all see the positive applications which the Verton design could bring.

“Main works contractors on major infrastructure projects must continue to innovate in the way works are planned and executed. There are a number of exciting companies creating innovative technologies for the construction industry with a view to improving health, safety and productivity and Verton is one of the companies leading the way.

“Verton’s new design has the potential to radically improve certain lifting scenarios so that manipulating loads with taglines is no longer required.”

Craig Hook from Sir Robert McAlpine believes the innovative system will increase efficiency on the development and construction of high-rise buildings in central London where space is at a minimum.

Craig Hook from McAlpine said: “We’ve undertaken trials with the R-Series to demonstrate how a load can be controlled without the need for taglines, particularly useful when working at height and in built up areas.

“It was really interesting to see the Verton system in action at the demonstration. I was impressed with the ease with which a load can be turned remotely, meaning people are removed from the zone where they could be crushed. The days of the reliance on taglines could be a thing of the past.”

Verton was recently selected to take part in the PortXL Port and Maritime Accelerator program in Rotterdam, Netherlands, where it established partnerships with global marine contractor Van Oord, international heavy lifting and transport specialist Mammoet and wind turbine supplier Vestas to further develop a new, safer lifting method for installing wind turbine blades. The deal was the largest in the four-year history of the PortXL program.